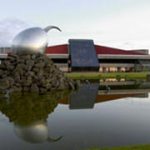 Keflavik International Airport (KEF) in Iceland has been voted the best small airport in Europe by participants of an extensive airport service survey conducted by Airports Council International (ACI).

KEF was awarded for the category of best airport for 2 million passengers or less. The airport actually came out on top in terms of service, but since it was placed in the smaller airports category, was not able to come out on top overall.

The ACI survey is published quarterly and annually with 186 major airports worldwide taking part, 54 of which are in Europe. Survey participants answer a number of questions about the quality of more than 36 service factors. The airports in the contest were judged in terms of overall customer satisfaction, helpfulness and courtesy of staff, ease of flight connections, cleanliness, and check-in times.

In addition to the latest victory, in 2009, KEF was ranked the best airport in Europe and came in second in the same category for 2010. Furthermore, the airport was ranked third in terms of best airports in the world in 2004 to a group of airports with less than five million passengers a year.

Óli Björn Hauksson, CEO of Isavia, the company that operates KEF, said, “We are extremely proud of these impressive results and the award confirms that staff members at KEF are world-class professionals. I would like to congratulate them on their impressive performance.”