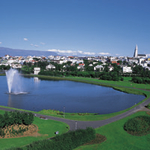 The German reality television show, hosted by Heidi Klum, is based on America’s Next Top Model, a concept introduced by Tyra Banks. The show revolves around IMG Models searching for a new supermodel. The show starts with around 12-19 contestants with one contestant being eliminated each episode by a panel of judges.

In addition to the elimination rounds, models face weekly challenges with prizes to be won. Past challenges have ranged from buying the most creative outfit for 50 Dollars, to running on a treadmill in high heels for over an hour.

The prize awarded for this week’s challenge was an Icelandair luxury vacation package for two, which includes flights to Iceland in Economy Comfort Class, five nights at the luxurious Hilton Reykjavik Nordica Hotel with a breakfast buffet, and also entrance to the geothermal springs of the Blue Lagoon.

The Hilton Reykjavik Nordica Hotel is in easy walking distance to all the best designer shops, boutiques, cafés and trendy bars in Iceland’s happening capital city; and the nearby Blue Lagoon is one of the world’s most unique spa resorts. As well as being unbelievably relaxing, the Blue Lagoon also moisturises and exfoliates the skin as only Mother Nature knows how.

Icelandair offers direct flights from Germany to Iceland and connecting flights to eight destinations across North America and Canada through its modern and convenient hub, Keflavik International Airport. Icelandair’s Boeing 757 fly all-year around from Frankfurt to Iceland, with additional flights from Munich, Hamburg and Berlin during the summer months. Additionally, Icelandair allows transatlantic passengers to stopover in Iceland at no additional airfare.