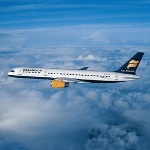 Iceland’s leading airline, Icelandair, has seen an increase in foreign sales over the past year, despite the ongoing media debate about the Icelandic economy.

Travellers are seeking to holiday in Iceland due to the favourable currency exchange rate for tourists visiting from both Europe and North America – also confirmed by the Lonely Planet world travel guide choosing Iceland as the 2010 best value destination for 2010.

“It seems that in the middle of the media interest we have been able to communicate the fact that this is a great time to visit Iceland, because as a traveller you simply get more for your money than ever before”, says Birkir Holm Gudnason, CEO of Icelandair.

Last week Icelandair added another 3 percent to its flight schedule, which was already 10 percent up from last year, as a reaction to the rising interest in Iceland tourism. Increased destinations on the schedule include Seattle, New York, Paris, Helsinki and Amsterdam.

Icelandair continue to provide quality connecting flights from Iceland, Europe and Scandinavia, as well as transatlantic flights to North America.

For more information on Icelandair and to book flights visit www.icelandair.com