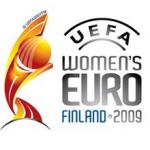 The Icelandic women’s football team is in Finland preparing for the European cup tournament which starts today with a game between Holland and Ukraine. This is the first time an Icelandic national football team has taken part part in a European or world championship. The tournament is now being held for the 10th time and spirits are high. Iceland play their first game tomorrow against France with Margret Lara Vidarsdottir the top UEFA qualifying scorer in the front row. Margret scored 12 goals in the games leading to the finals in Finland. Icelandic football has come a long way over the past years: it is less than 20 years since women in Iceland were first allowed to practice on the main fields of their clubs and in 1988 there were talks of giving up the national football team, but things have changed and Iceland now has a female team among the best.