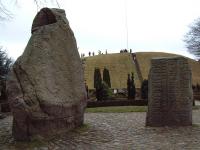 The Jelling Stones, ancient monuments that declare the birth of the Danish nation, have been ordered by UNESCO to remain outdoors in their natural location despite calls from Denmark’s National Museum that they are steadily eroding. The stones’ outdoor location at Jelling Church in Jutland places them at the mercy of a cold and wet climate.

Experts from UNESCO did their own research and concluded that the stones were best left where they are. UNESCO has placed both the Jelling Stones and the church on its list of World Heritage Monuments, so if Denmark wants to maintain their prestigious status they have to follow the orders of UNESCO.

The Copenhagen Post reports that Denmark’s National Museum determined earlier that the cold, damp weather in Jelling was slowly eroding the stones and their priceless runic engravings, and suggested that they be moved indoors to better preserve them.

The oldest stone, which is believed to have been created by Danish king Gorm the Old in the 10th century, is a national treasure noted for its use of Runes. This stone is deemed to be in extremely critical danger of deterioration by the National Museum. A larger stone erected by Gorm’s son, King Harald Bluetooth, is considered to be in ‘worrying’ condition.

UNESCO wants the stones left in their existing location. They feel Denmark’s Heritage Agency and the Culture Ministry should be able to properly oversee their management and preservation. The stone of Harald Bluetooth supposedly marks the first advent of Christianity in Denmark.