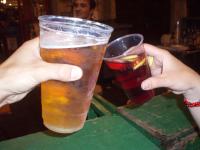 Today is the day that Iceland celebrates entering its third glorious beer decade. Icelanders have celebrated Beer Day on 1st March every year since 1989; but today’s twentieth anniversary is being taken more seriously than usual.

Iceland enforced total prohibition on alcohol from 1915 to 1922, but bizarrely failed to legalise beer until 1989. In a land where a cold one was verboten but vodka was perfectly acceptable, the strange tradition of bjorliki grew up. Bjorliki basically means ‘like beer’ and is the result of adding a shot of vodka to a light beer (2.25 percent or less, which was legal). The taste was nothing to write home about; but the desired effect was achieved.

With all the bjorliki fuss over and done with and the country still not completely destroyed by marauding gangs of murderous, thieving, beer drinking arsonists, it seems only fair to celebrate.

Bars across the land are enticing people with half price (or even less) beer all day today and slightly woollen heads at work tomorrow will likely be tolerated a tad more than on any other Monday.