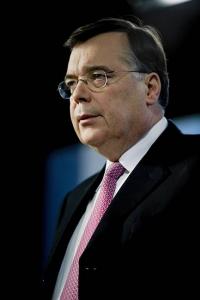 The Icelandic artist Snorri Asmundsson has taken the decision to put himself forward for the leadership of the Independence Party at the national conference beginning 29th January.

The current Independence Party leader is Prime Minister Geir H. Haarde, who has not expressed a wish to resign his position and has not invited candidates for a leadership vote.

Asmundsson says he is no politico, but that he feels qualified to get the situation in hand better than the current party leader. He says he is receiving enormous support within the party for his leadership challenge.

Asmundsson is a fully paid-up Independence Party member, and has been for a long time. “I feel great support for my move and am totally drowning in encouragement,” he told Visir.is. “There are many who want Geir (Haarde) out, which could happen at this time. I’m not any sort of politico, but I think I could maybe do something now,” he continued.

Snorri Asmundsson is a well-known protest nominee; having previously put himself forward in the presidential election race and for Reykjavik city elections.