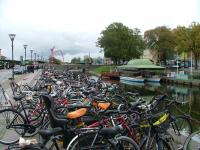 Tensions in the southern Swedish university town of Malmo flared up again over the eviction of squatters, resulting in two nights of violent rioting. Riot police from Gothenburg and Stockholm were called in to provide support for their besieged colleagues who were pelted with Molotov cocktails, rocks and other debris.

Regional police spokesman Charley Nilsson told The Local newspaper “we don’t think it’s over yet. We think it’s going to continue and we have to be prepared to work around the clock.” He requested specially trained police units from around Sweden to come to Malmo and help deal with the crisis.

Tensions have been high in Malmo’s mainly immigrant district of Rosengard ever since police forcibly evicted three squatters who had been occupying an Islamic cultural centre. During the height of the recent rioting in Rosengard, protestors hurled Molotov cocktails and issued bomb threats against a petrol station.

Police spokeswoman Ewa-Gun Westford could not even guess how many police vehicles have been damaged during the riots; such was the extent of the rioting. Local protestors were apparently joined by left-wing extremists from outside the area. To make matters worse, Malmo’s fire and rescue units refused to enter the riot area because their safety could not be guaranteed.