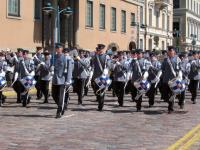 One of the more bizarre issues to emerge from the August War between Georgia and Russia is the question of whether Russia’s military conducted that mission wearing camouflage designs it stole from Finland. Finnish authorities are looking closely at images taken in Georgia of the Russian army allegedly wearing M/05, a camouflage pattern based on digital images of Finnish forests.

The M/05 pattern is copyrighted and legally protected by the European Union, leading Finnish commentators to wonder if Russia has committed copyright piracy. The IHT news agency reports that Finland’s government has decided not to make an issue out of this with Moscow, especially since the legal protection is not recognised in Russia itself.

But Captain Eero Karhuvaara, a spokesman for Finland’s Defence Staff, says the local newspapers are running with the story. Finns don’t have a special attachment to their army’s camouflage design, but it’s the principle they’re riled up about. Russia’s Interior Ministry flatly denies copying Finland’s pattern.

“None of us uses the M/05 camouflage for their uniforms,” a ministry spokesman said to Komsomolskaya Pravda, a daily Russian newspaper. “No one wears it. Our quartermasters haven’t heard of it. It seems that the Finns simply wanted to publicise their product and came up with this story. This false story.”

The M/05 design was created from tens of thousands of digital photos of Finnish forests, Captain Karhuvaara commented. It took years to create so Finland has banned reservists from using it and filed for copyright protection within the European Union. “If Russian Ministry of the Interior troops were to invade Finland,” he said, “we would have big trouble.”