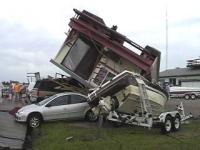 Visir.is thanks its readers for responding so well to their call for kreppa jokes. Kreppa is the Icelandic word for recession (and also the verb ‘to clench’, like a fist). Here we attempt to bring them to a non-Icelandic speaking audience!

Kreppa is a word that Icelanders often do not bother to translate into English; and which some English speakers outside Iceland have already adopted – possibly from the ‘Kreppanomics’ article in The Economist a few months ago.

Kreppa is a great sounding word, so please, feel free to take it, compliments of IceNews. But anyway, back to the story: Visir.is posted the first batch of jokes on their website this week. If you don’t laugh, remember that jokes sometimes lose something in translation…

How do you get rid of the stockbroker at your front door?
Just pay him for the pizza!

Do you know how to save a risk investor (probably best translated into English as speculator (?)) from drowning?
No?
Good.

Back to the future
Five reasons to believe it is now 1975:
1. We are at war with the British
2. There are foreign currency restrictions
3. Inflation is going crazy
4. The most popular songs are by ABBA
5. The Prime Minister is called Geir and is from the Independence Party

The hot air balloon
A man in a hot air balloon notices that he is losing height. He then notices a woman on the ground so lowers his balloon a little further and calls to her: “Excuse me! Can you help me? I promised to meet my friend and hour ago, but I don’t know where I am.”

The woman answered: “You are in a hot air balloon which is hovering at a height of ten metres, between 40 and 41 degrees north and between 59 and 60 degrees west.”

“You must work with computers,” said the man.

“I do indeed,” answered the woman. “How did you know?”

“Well,” the man replied, “All that you just said is technically right, but I have no idea what I’m supposed to do with the information, and am therefore still lost. It’s fair to say you’ve not really helped me at all. If anything, all you have done is made me even later.”

The woman replied: “Ah, you must be a politician.”

“Yes,” the man said in surprise. “But how could you know that?”

“Well,” she said, “You knew neither where you were, nor where you were going. Only hot air has got you to where you are right now. You actually admitted you don’t have a clue how to sort out your situation, and you expect people below you to sort out the problem for you. And you are now in the same situation as when we just met, but now all of a sudden it’s my fault.”