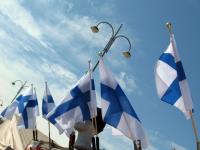 In the present centre-right government, the National Coalition is the junior member of the governing group, second to the Social Democrats, who have won 12 of the 14 municipal elections over the previous 50 years, according to the Bloomberg news agency. But apparently, Finns were reminded of the banking crisis of the 1990s that forced 40 Finnish banks to merge and created an unemployment rate of 20 per cent.

Although Finland’s current banking situation isn’t nearly as bad as it was in the 1990s, consumer confidence is at a 13-year low.

The results have significantly strengthened the National Coalition’s profile in Finland, but will make no difference to the national government at the moment; except perhaps to undermine the Social Democrats’ authority.

Professor Tuomo Martikainen of the University of Helsinki said in an interview that “people who feel economically uncertain will support a party they feel will have a beneficial impact on the economy. [The National Coalition] is a safe choice in difficult times. It emphasises work and entrepreneurship.”