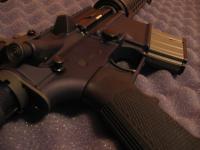 In the aftermath of last week’s school massacre that left 11 people dead, including the shooter, Finland’s government is mulling over some serious changes to its liberal gun laws. A number of new steps are being added to the procedure for obtaining gun licenses and some types of guns may be banned in the future.

Finland has been reflecting deeply since 22 year-old culinary arts student Matti Juhani Saari walked into his school in Kauhajoki and shot nine students and a teacher dead last Tuesday. This incident is the second fatal school shooting in less than a year involving guns that were legally licensed in Finland.

According to NewsRoom Finland, the country’s interior minister Anne Holmlund has opened a committee to consider bans on certain types of handguns. Although Holmlund admits it will be difficult to keep the bans current, due to the continual influx of new types of weapons, this drastic measure may be necessary to curb a potentially growing problem involving gun crime in Finland.

The government has just implemented several new guidelines concerning the licensing process for handguns. All applicants will now have to submit a medical certificate that lists any known mental health problems. In addition, new handgun licenses will only be issued after the applicant has completed a year under supervision at a shooting range. Finland has the world’s third highest rate of gun ownership among its citizens.