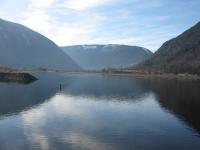 During the bright summer season in Norway, hikers, hunters and nature lovers flock to the mountains (fjellene) to enjoy the scenery and exercise. But local government officials are concerned that there are too many visitors these days and they are irreparably damaging the fragile alpine environment.

Local officials in Oppland and Hedmark are trying to shut down two of the most popular trails in Dovre National Park. They are also attempting to ban kiting in Dovre as well as the Rondane Nationals Park. At the very least the officials plan to restrict recreational activities in certain areas that are inhabited by Norway’s rapidly declining reindeer population.

Local hikers and outdoor enthusiasts are naturally displeased with the proposals. One of the trails to potentially close is maintained by the Norwegian Mountain Trekking Association (DNT) and leads hikers to the group’s recently rebuilt Grimsdalshytta camp.

Another issue being raised by officials is the safety of hikers on worn-out trails. “People need to take responsibility for themselves when out hiking,” Lars Eide of Oppland County told the newspaper Aftenposten. But the fact is that many trails need better markings and reinforcement.

A woman recently fell off a ridge to her death near Gjendesheim, a protected habitat for eagles, while walking an unmarked trail. Many environmentalists do not want to see guard rails and safety nets spoiling the mountain views; but officials say that hikers’ safety is the most important factor.