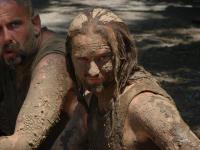 Finns are generally considered rather conservative, but there’s no disputing that they are the world’s reining champions of bizarre sporting events. During each summer, the Finns sit on anthills, hurl mobile phones, play air guitar and carry their wives in an effort to be the best at something.

MSNBC reports that most Finns will tell you their crazy sports are just a fun way to blow off steam after the long dark winters. But the number of foreign visitors travelling to Finland each year is growing by around six percent, and these eccentric competitions are turning out to be a popular draw for local tourism.

Some 50 different events take place over the three months of summer. They are often billed, half-jokingly, as world championships. But the most popular ones, such as the wife carrying obstacle course race, or the air guitar championships, attract up to 10,000 spectators. Another hugely popular event, swamp soccer, has even prompted other countries to hold their own competitions to see who will represent their nation in Finland.

The tourism benefits of these events are potentially huge for remote rural communities, and often tie into traditional annual festivals. Sometimes, they become so popular that authorities have to shut them down. The annual beer float, whose humble roots involved a few Finns floating down a river in tubes, drinking beer, attracted more than 1,400 participants this year. The number of floating boats, sofas and water scooters was so chaotic that local police forced organisers to shut down the web site advertising the event over safety concerns.