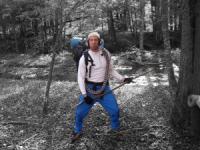 Hot Lixx, whose real name is Craig Billmeier, adapted his stage name from the television series M.A.S.H. and its character Hot Lips Hulahan, the sexy co-star head nurse. Sporting shockingly tight black pants, satin shirt and a red tie, Hot Lixx destroyed the competition with an air guitar performance that seemed to summon the spirit of Eddie Van Halen himself.

Perhaps it was his elaborate armbands, but Hot Lixx had his timing down pat and complemented this synchronised perfection with moves that would make David Lee Roth or Robert Plant envious. Event organisers released a press statement saying that “the two-year reigning Air Guitar champion, Japan’s Ochi ‘Dainoji’ Yosuke had to give in to the overwhelming new champion [based entirely on Hot Lixx’s] impeccable timing and overall solid performance.”

The Air Guitar Championships, one of the world’s most novel and thoroughly entertaining annual competitions, has been held in the western Finnish town of Oulu for the past 12 years. Hot Lixx’s amazing performance can be witnessed on the video-sharing website YouTube at http://www.youtube.com/watch?v=efNdI8uzWN8.