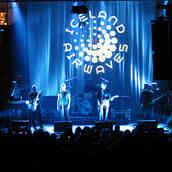 Iceland Airwaves, the biggest event in Iceland’s musical calendar, will take place this year on October 15-19.

Icelandair, one of the main sponsors of the event and an original founder, is currently offering package deals to Iceland Airwaves from $877 or £299 per person. The offer includes transatlantic flights from an Icelandair gateway, two nights’ hotel accommodation, breakfast and an Airwaves Festival Pass.

Since its debut it an aircraft hangar in 1999, Iceland Airwaves has proven one of the premier showcases for new music – Icelandic and otherwise – in the world. It’s been called “the South by South West of Scandinavia” and “as responsible for all of Reykjavik’s recent positive press as Bjork herself.”

“The Iceland Airwaves festival (is) the most eclectic, entertaining and inspirational music festival around,” says Kerrang! magazine.

But Iceland Airwaves doesn’t stop at music. Reykjavik proves itself the perfect host year after year: small enough to be welcoming and sophisticated enough to offer cultural, historical and nightlife diversions to rival cities ten times its size.

Other highlights include day trips to geysers, waterfalls, lava fields, not to mention the world-famous Blue Lagoon geothermal spa which will play host to the Airwaves Hangover Party.

Icelandair is the biggest airline in Iceland and connects Iceland to 24 major destinations in Europe and North America. With inclusive Airwaves packages from international cities starting at less than normal flights to Iceland alone, getting neck-deep in one of the hottest, coolest music festivals anywhere is almost a little too easy.