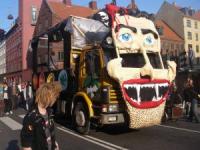 Long running efforts to formalise the status of Copenhagen’s most famous suburb seem to have reached a deadlock. The hippie enclave that has squatted on a former army base near the city centre for four decades initially agreed to proposals from city administrators but with too many conditions attached.

Carsten Jarlov, representing the Palaces and Properties Agency, says his party has lost patience, pointing out that the state had already spent ‘20,000 hours and around 20 million kroner’ on resolving the matter.

‘I don’t see the point in meeting again,’ he told public broadcaster DR. ‘Now the courts will have to decide the fate of Christiania.’

Residents of this ad hoc suburb that has no proper utilities such as paved roads, and gets away with loose law enforcement on issues such as drug use, are hoping they will be protected by rulings passed in 1978 and 1989 that allow them final say over the colony’s fate.

More than 700 lawsuits have been filed by residents against the government eager to protect their ‘colony’ and avoid rent – which few have paid in any significant amount. The issue of 150 additional houses built in the colony and who gets to administer a waiting list for such housing, as well a demand for a 10 million kroner fund to subsidise introduced rents, are all conditions over which negotiations have broken down.

The leading party in the government, the Liberals, want no further time wasted talking to the residents, while the Conservatives prefer to keep the door open.