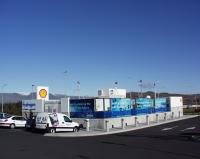 For those who want the hydrogen experience but who don’t want to drive, the first hydrogen powered commercial vessel started sailing the Icelandic waters in April. The Elding boat offers whale watching tours for EUR 43 (USD 66) a trip and has got good reviews. Not only is the hydrogen-powered engine environmentally friendly, but it is easy to shut down, which allows whale watchers to enjoy the sounds of whales swimming and blowing, something a diesel engine on most boats does not allow.

The hydrogen powered ships and cars are just a few ways that Iceland is using to become a carbon-neutral nation. Already, the country derives 80 per cent of its electricity from hydropower projects and most of the rest of its electricity from geothermal projects. Transportation, including cars and fishing boats, remain the largest challenge to Iceland’s becoming carbon neutral and if the Elding and the converted Prius are a success, Iceland could be well on its way to achieving its environmental goals.

Newer PostIceland’s Gunnarsson set to play English football
Older PostIn the name of the Dog, the Cat and the Holy Hamster