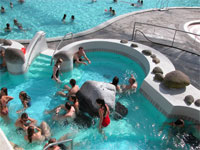 A recent study comparing the quality of life in 30 European countries ranked Iceland as the place where residents are most likely to live long and happy lives.

The survey, called the European Happy Planet Index, ranked countries by comparing their life expectancy, life satisfaction and carbon efficiency. Comparing this year’s results to results from 40 years ago, the New Economic Foundation and Friends of the Earth, the groups who published the study, concluded that European nations have gotten worse at creating well-being over the years.

The best countries at creating well-being in Europe were those in the Scandinavian region. After Iceland, Sweden placed second followed by Norway. Denmark came in sixth position. Perhaps surprising for some was that Romania ranked higher than the UK which was placed 21 out of 30 countries. At the bottom of the rankings were Luxembourg, Bulgaria and Greece.

Another conclusion from the study was that those countries which operated under a strong market-led economic model did not fare well in terms of the happiness of their citizens. The head of climate change for the New Economics Foundation, Andrew Simms concluded; “What is the point if we burn vast quantities of fossil fuels to make, buy and consume ever more stuff, without noticeably benefiting our well-being?”